What is a poster? 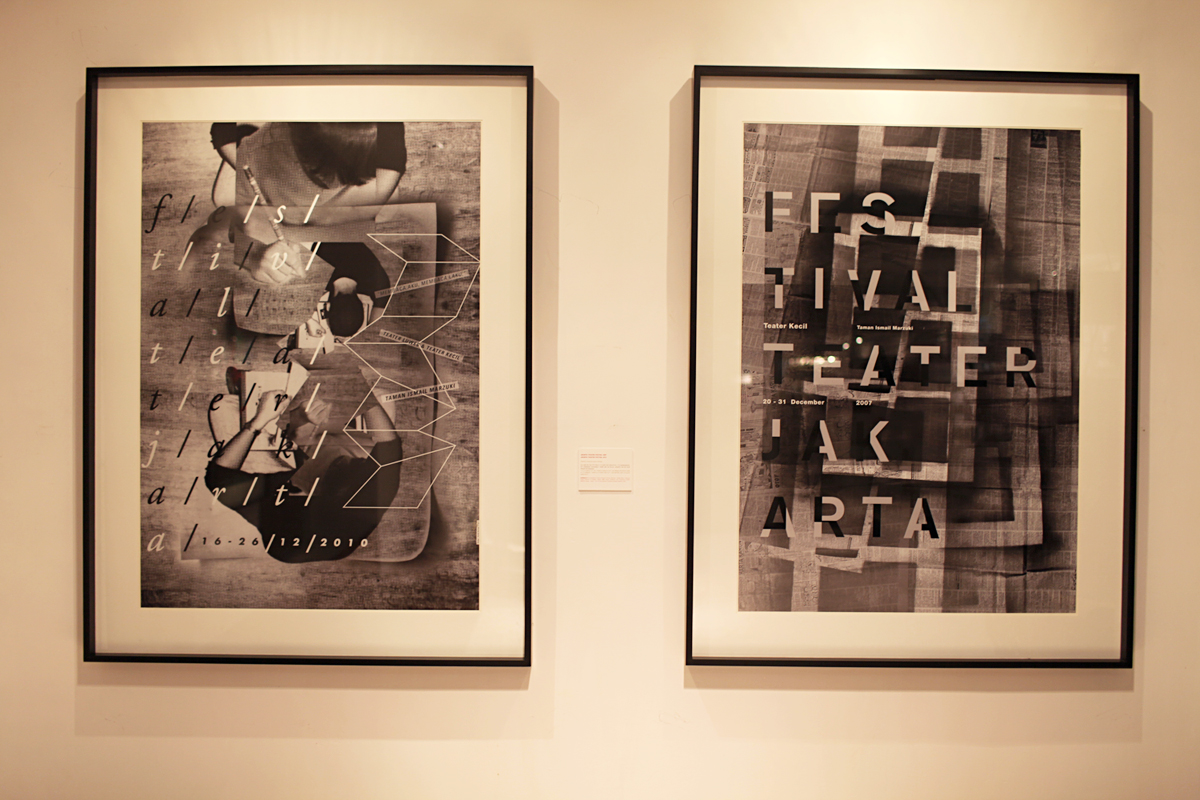 We understand it as a medium of communication, commonly associated with advertisements and slogans. Yet posters also live a parallel existence in museums, collections, as iconic moments of 20th century visual art.

Aesthetically, they stand equal with other members of the visual arts family. Many posters borrow and overlap with drawings, photography, and calligraphy to various degrees.

But what truly sets posters apart is the role and purpose of aesthetic and representation and the consequent relations between the artist, viewer, and subject. A painting, for example, can be about something, or about nothing at all. It can rest alone on its aesthetic values and exist in and for itself.

Posters, on the other hand, no matter how beautiful and artful, are always about and for something else. Sandy sums up the main distinction between art and design: ‘traditionally, design has to work. Art doesn’t.’

This exhibition, of arguably the first artist dedicated to poster art in Indonesia presents works that shifts between those two spheres while simultaneously questions and challenges the dichotomy.

This is not an exhibition of posters pretending to be art. It is, as Sandy remarked, of ‘the fine art of graphic design.’

Poster as a medium has distinct spatial and temporal presence – in terms of its subject matter, and also in imparting a sense of immediacy. It is very much here and now, and fully conscious of its ephemeral nature.

Sandy’s work explores the constraints of the medium, which are not seen as limitations, but that which underlies its relevance and dynamism.

Snatched from its natural home, the public space dilutes a bit the immediacy imparted through their motivation and context. Nevertheless, their original purpose of existence has created the conventions that remain essential to a poster.

After a few years working on posters as an independent project, Sandy was seriously re-considering his decision. He had been submitting his works to a number of competition, yet have heard nothing back. Then in 2009, he received a postal package notifying that his work had been accepted in International Toyama Triennale, the first of his many international exhibitions.

In the catalogue, Koichi Sato, one of the juries of Toyama noted that the word poster is derived from post, which has two meanings: a pillar, upon which a poster is usually placed, or the postal system. “Our posters are letters,” Koichi Sato remarked.

A Post(er) is consisted entirely of the graphic elements from the post he received from Toyama, and the package itself photographed against the back of a framed poster. With this work, he re-entered and was accepted in Toyama 2012, thus completing the cycle: the posting of a poster of a poster and posted materials, sent through post.

This highly self-referential work is more than a clever, yet sincere insider’s joke between Sandy and the Toyama juries. It is also a statement of the rhetorical nature of posters. Just as a letter is never written without a reader in mind, a poster artist will never make something that nobody understands.

Yet everyday we are bombarded with the an overwhelming quantity of images and messages beamed across through billboards, television and computer screens. Moreover, they are often predictable. Either they give too much away and lose intrigue, or blatantly try to guess and use emotive appeal. Positioned as consumers of signs, symbols and icons, viewers learn to protect themselves through indifference.

The challenge then, is for a rectangular, motionless two-dimensional space to captures and holds one’s attention; to say something, and say it well enough to cut through the apathy. How does it appeal to the senses without being sensational?

To this end, Sandy employs graphic discipline, strongly influenced by Swiss modernism and Russian Constructivism to remove distractions and cut to the matter at hand with a rigorous and thoughtful choice of representation. He.

Using a verbal analogy, Sandy’s posters do not try to out-shout the cacophony. Instead, he proposes a direct, yet subtle invitation to inquire.

Thus through scattering of burnt matches (Resting Place), a single lotus flower (Wanci), the interplay of composition, colour and photography (Coppelia) he trusts in the intelligence of the viewer to see and feel something other than what she already knows. These images taps into shared perceptions, images, and connotations to reach that which is beyond the apparent.

Like cinema and theatre, poster art is a bastard of literature and visual arts Sandy’s frequent use of cinema and theatre as subject matter expresses his view on the poster’s dialogical nature, of active engagement. It never assumes to be the timeless truth, it is an artist’s interpretation, and because of that it brings people to interpret. It does not remain static, unfinalized, active and dialogical.

As an exploration of the senses, the question raised by the Festival of Sight and Sound (FSS) series is abstract yet fundamental – how does one graphically convey rhythm, melody and aural texture? The four posters share a common theme of the intersection of aural and visual perception in rhythm, repetition, distortion, movement, and texture.

However, Sandy explores these themes using two very different formal techniques – broadly speaking, digital and analogue. The choice of composition, colour, texture and materiality, were made not only for aesthetic effect, but also to convey the message itself, as Marshal McLuhan stated,

“…the medium is the message. This is merely to say that the personal and social consequences of any medium.. result from the new scale that is introduced into our affairs by each extension of ourselves, or by any new technology.”

In SSF ’10, a landscape of text-images blur and overlap with each other, creating a sense of vibration and force. The background seem to be moving and reaching beyond the primary typography and out of the frame. Waves and circles loop through and over each other in FSS ’11, conveying depth through a play of perspective. The composition of geometric forms suggests the ebb and flow of a musical crescendo.

In both of these works, the Illusion of objective materiality is digitally produced, referring to the technological advances which enables the production of sounds. One is reminded of high fidelity and intricate sound engineering of a dance party, and also of the crisp, holographic quality of cinematic surround sound.

SSF ‘07 and SSF ‘08 take a contrasting approach. The austerity of colours and materials chosen alludes to foundation of sight and sound. Lo-fi and acoustic musical instruments rely on elemental physicality, of manual creation of texture and vibration of sound. Early cinema consist of the interplay of light and shadow, contrast, of optical illusions.

Sandy exposes the studio setting of the photographed image, alluding to the technicality and production of both the poster and audiovisual objects.

By juxtapositioning elements of craft with modernist art, he also comments on the blurred boundaries between art and its constitutive outsiders, design and craft. Appositely, this technique is employed in the posters for Inacraft and Festival Kebaya Indonesia.

Sandy’s works are strikingly directional and provocative, yet in a sense he is old-fashioned in his adherence to the restraint, thoughtfulness and economy that underlies the modernist schools of graphic art. There is wistfulness in his works, reminding us of the civic and idealistic aspect of graphic art.

Television, internet, gadgets and smartphones have altered, for better or worse, the way people engage with images and one another. Posters have not completely disappeared just yet, but they are not unchanged by digital technology. The ease of digital image production runs with the motor of the commercial industry. As a result, driven by the time and financial pressure, they are often seductive, but not necessarily engaging.

Sandy’s works embrace the condition that we are living in, yet proposes a possibility: surely design has to work, but can there be art in and of something that works? Exhibiting these posters in a gallery ironically is a provocation to apply graphic art outside of museum space and back to life, where it belongs.

Graphic art, as Lyotard noted, is full of paradoxes. It finds freedom within constraints. It is capable of the highest form of abstraction, yet firmly rooted in functionality. It borrows relentlessly but it is original. It maintains immediacy presents the familiar in something new. It refers to the past but breaks from the past.

Even the name poster itself carries in it a contradiction. The word post is derived from two Latin words; postis a pillar, upright where posters are erected. But also from positus, to place, from which we derive another meaning of the word, which is to send by mail. One refers to its passive dimension, relating to something to look at. The other, active, reaching out, inquiring, inviting.

Now is a Post(er) one or the other? Can it perhaps be both?