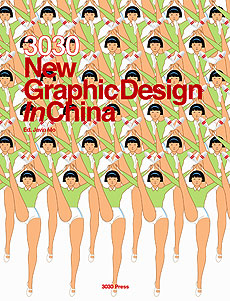 The book cover with a design by Li Xinlu. Photo courtesy of Li Xinlu and 3030 Press.

Thirty of China’s best young graphic designers around 30 contribute to the first ever survey of new graphic art in China, from poster, print and logo design to packing and illustration. 3030: New Graphic Design in China presents a fascinating look at the dramatic changes that have transformed the practice of design in the country over the past few years and has helped to transform it into a dynamic new centre for creative innovation in Asia. The book includes an introductory essay by Bono Lee, editorial director of Modern Media Group, in China and the author of books including Hong Kong 101 and Shanghai 101.

The Editor
Javin Mo is the creative director of milkxhake, a Hong Kong-based graphic design unit which he co-founded in 2005. In 2004 he was invited to join FABRICA, the Benetton Research and Communication Center in Italy and from 2004 to 2005 was art director of FAB, the FABRICA quarterly magazine. In 2006 he received the Young Guns 5 Award at the New York Art Directors Club Annual Awards and received merit awards at the 86th New York Art Directors Club Annual Awards and the British D&AD Awards 2007. His works have been widely published in international design magazines and journals.