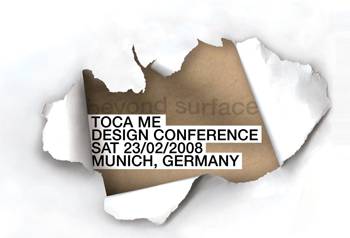 Gathering of the International Design Scene in Munich, Germany!

At TOCA ME design conference on 23rd February 2008 international and national designers are going to give an insight into the developing processes and different techniques of their creations.

What is design? How powerful is design? Where does design fail? On 23rd February 2008 TOCA ME design conference will take place for its third time in Munich’s Reithalle with renowned speakers from around the world. Topic and aim of the conference themed “beyond surface” is the ongoing question about the location decision of design as well as the networking of Munich’s design and creative scene and the international design centers.

Among the speakers of the TOCA ME design conference will be Erik Natzke, one of the most sought-after web designers worldwide, and Andy Cameron, creative director of the design research center Fabrica, founded by Luciano Benetton und Oliviero Toscani. Besides, the line-up will consist of James Paterson, multimedia experts from Nanika & Hi-Res!, Mario Klingemann, Rufus Deuchler and the multi disciplinary design studio Dvein from Spain, who will all give an insight into the developing processes and different techniques of their creations.

TOCA ME design conference will be surrounded by an exhibition showing current work of the leading designers as well as presenting the winners of the design competition which was organised in the run-up to the design conference. The main focus of the exhibition will lie on interactive and multimedia installations integrating the entire audience of the event. Besides, the creative power of Munich’s design scene will be showcased under the theme “Munich’s design heroes.”

Real instead of virtual networking will take place in the generously arranged lounge of the TOCA ME design conference. This is where attendees will have the chance to meet and exchange with each other and – after the presentations – to enjoy the rest of the evening in a relaxed atmosphere.

Host and organizer of the design conference is the Munich-based design studio TOCA ME, which was founded five years ago and specializes on print, web and event design. With the annual design conference TOCA ME aims to create a common communication platform for both national and international designers. This platform not only supports the creative processes of the designers betwen each other but furthermore enables a quicker access to the global creative pool. Aside of the annual design conference TOCA ME regularly organizes the so called “Open Room,” which quickly advanced to the meeting point of Munich’s design scene.

Visit the site to learn more!