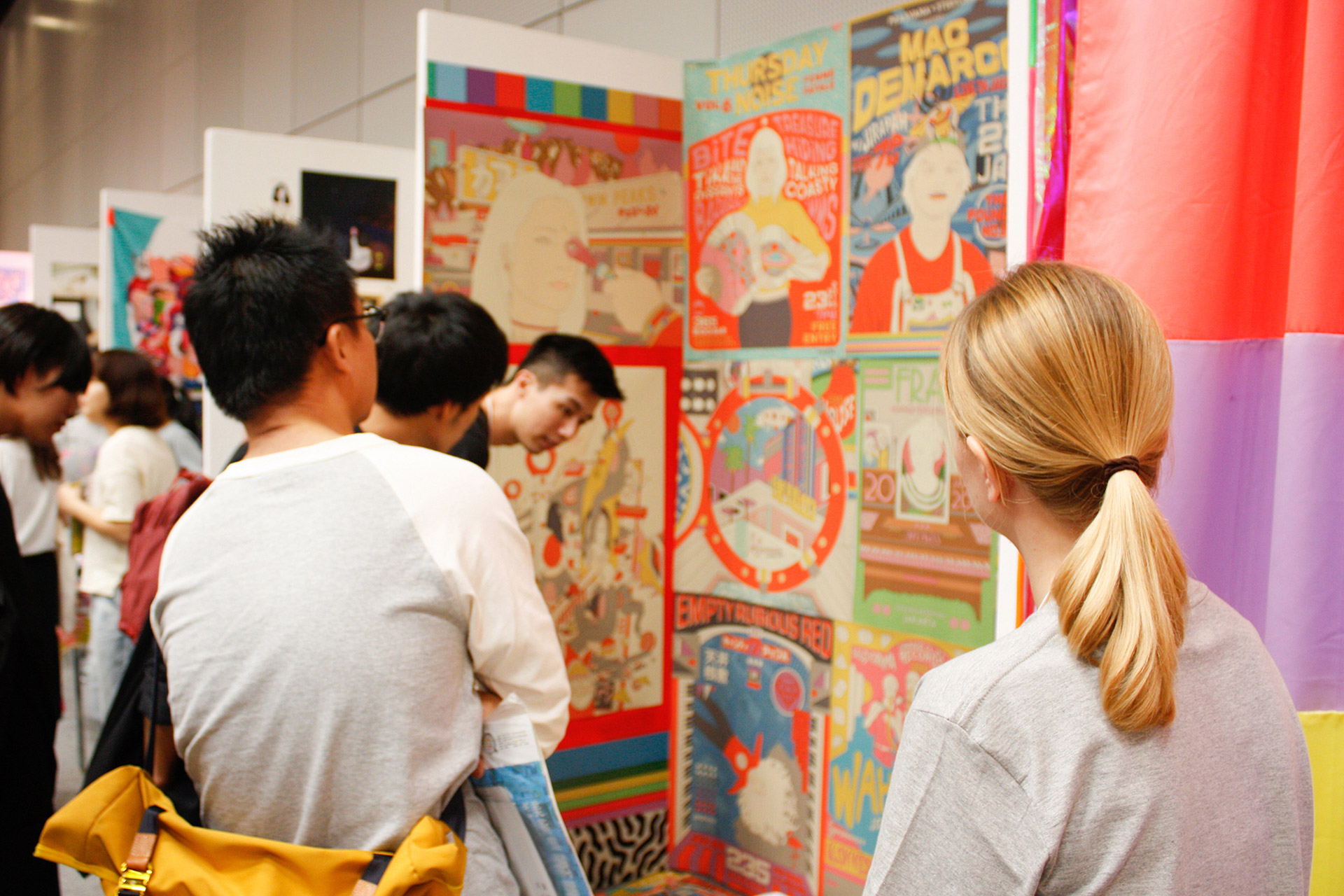 Saturday, October 29
11.00 – 20.00 PM During this session the artist will available to present their work in present. Also, there might be a secret performance on this day.
15.00 PM Artist Talk
17.00 PM Special music performance by CRAYOLA EYES 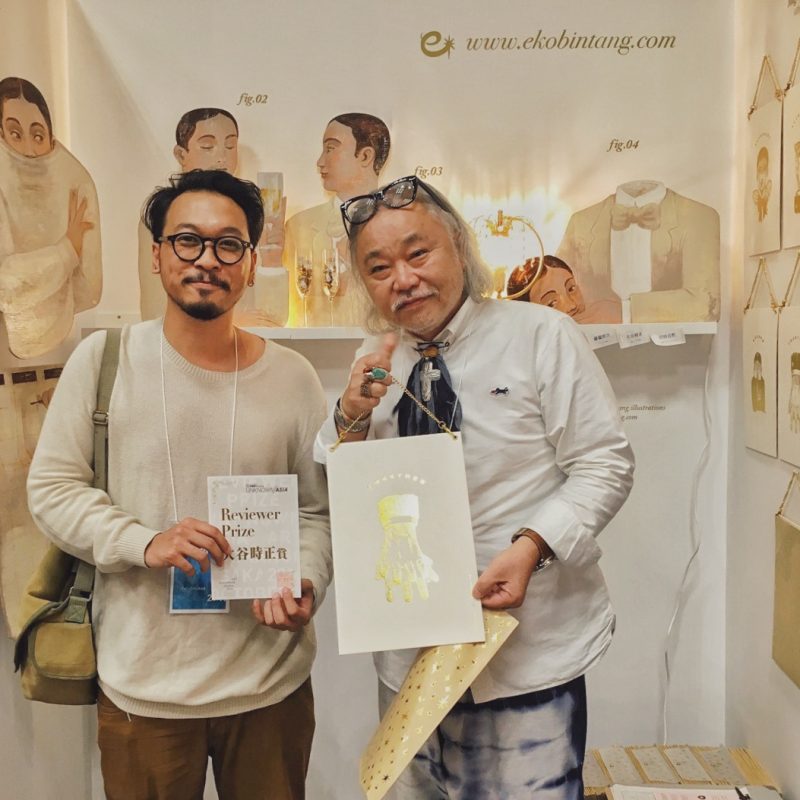 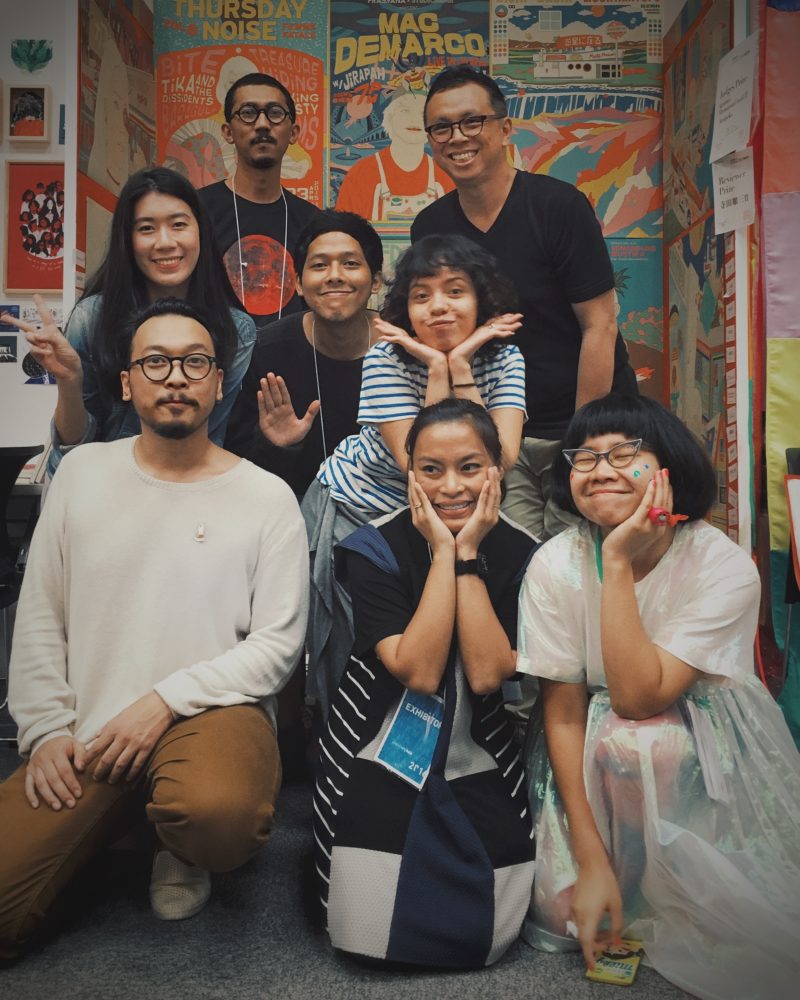 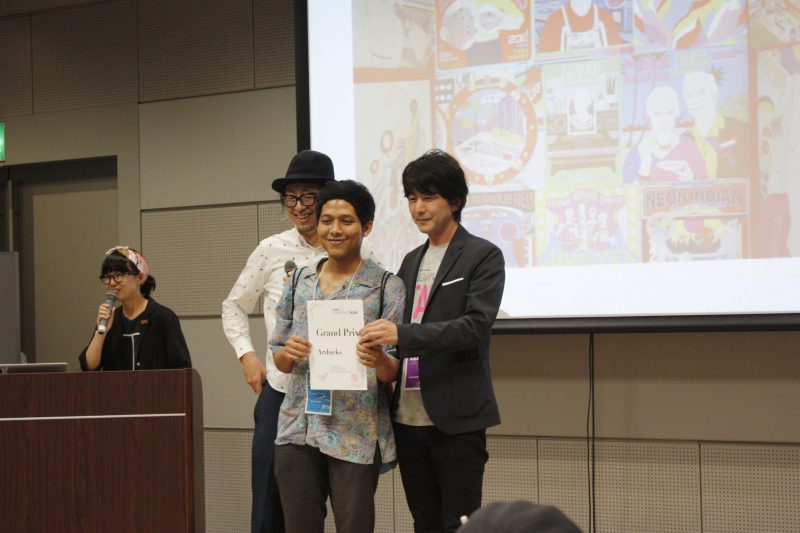 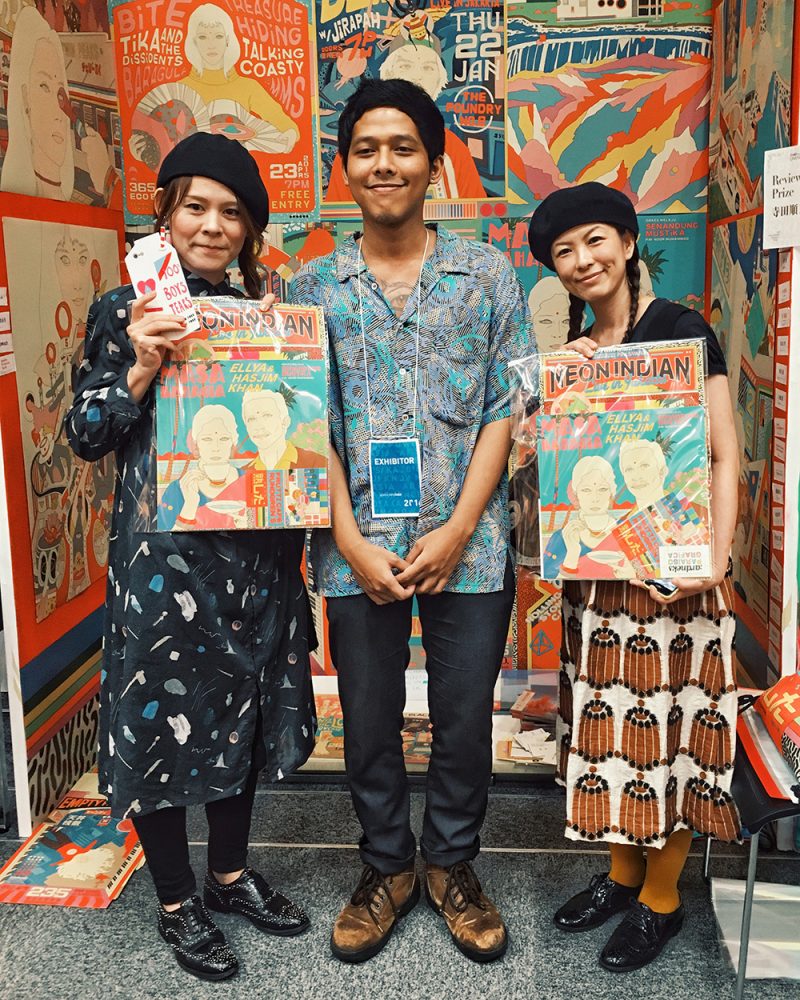 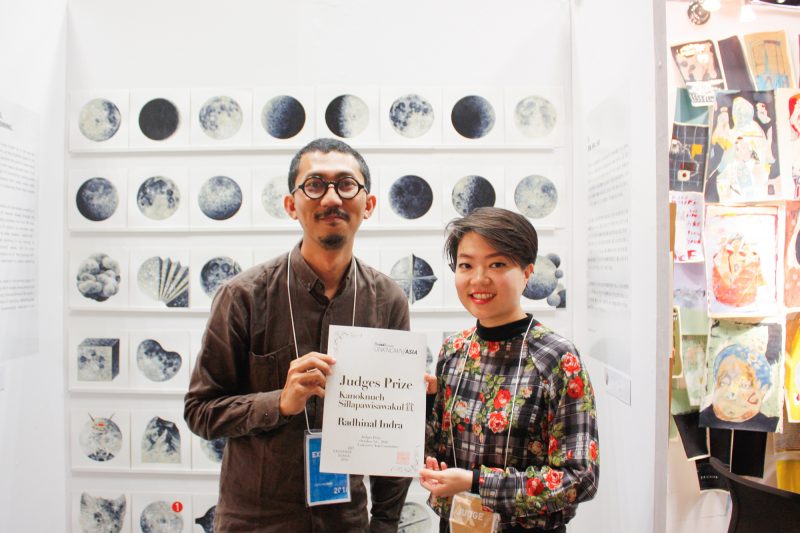 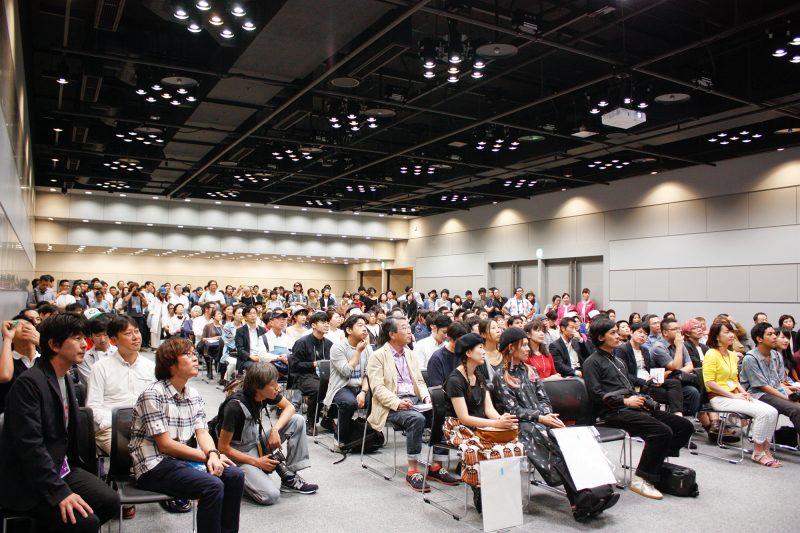 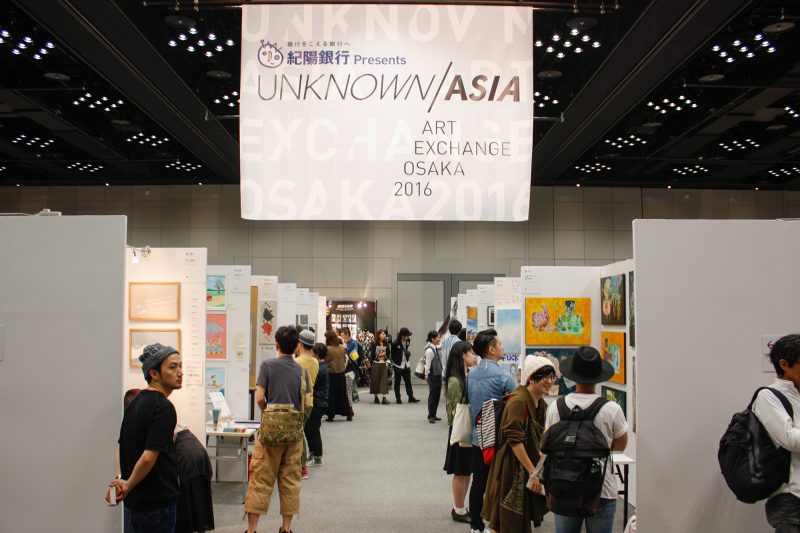 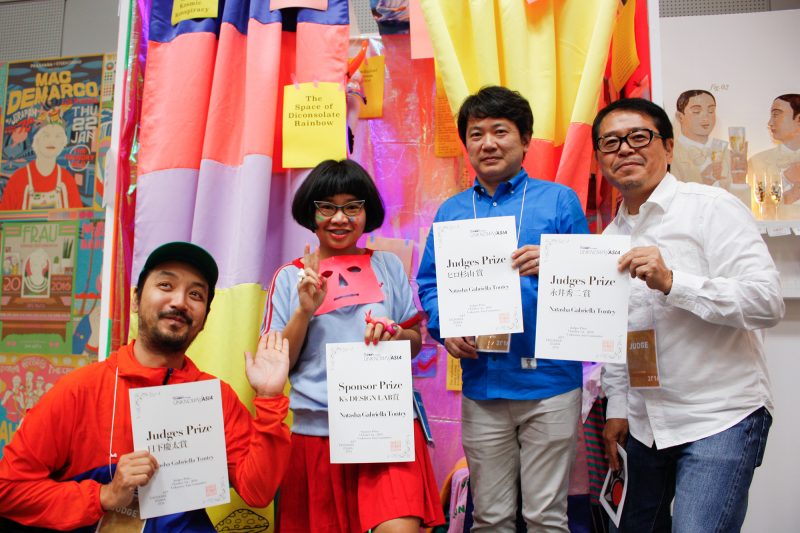 Eko Bintang
Eko Bintang is a Taurean born in May 17th, 1984. He’s an Illustrator and Art Director based in Jakarta Indonesia. His illustrations holds lost & found memories and nostalgic feelings. Also express his inadequacy to engage himself in other gestures in real life. He loves to be involved in the creation of ideas as well as in the process of image-making. His work has been featured in many Indonesia’s magazines such as Forbes, Harper’s Bazaar, Elle, Dewi, Nylon, Clara, Epicure, Garuda Inflight Magazine etc.

Self-exploration presented in a discussion with our inner-selves.

Kendra Ahimsa
Kendra Ahimsa was one of those curious kids who ate the paste when no one saw him. At first he just wasted the money his mother invested in schoolbooks by drawing them with stuff he thought was funny, until he saw how drawing works as a medium that could channel limitless imaginations. Fascinating over vintage record covers, posters, ephemeras, and cornucopia of books, his fondness of visual arts gradually blossomed as he grew up. He is known under the moniker Ardneks, a multi-disciplinary visual outlet with a distinct style that heavily hallmarks music while at the same time peels on the playful combination of bright bold colors, cross-culture pop references, intergalactic deities, and dreamy tropicália.

Radhinal Indra
Radhinal Indra was born in 1989 in Bima, Indonesia. Studied at Bandung Institute of Technology majoring in Graphic design. After 4,5 of professional years as Art directors in Jakarta, Radhinal Indra move back to Bandung as an Artist. Growing up in family with academic background, has influenced his art making process. Combining between scientific insight and painting approach in expressing messages, have been strong factor which always appear in his works. He always admire the pragmatism of any mediums practice. He often use diagrammatical composition as tendency to find formula and order in complexity of culture interacting with nature, especially astronomical objects. In large, his works is a representation of human nature in fabricating delusions. He try to grasp diverse cultural aspects which correspond with moon. Whether it’s about science, language, myth, even popular culture. Each artworks is a concentration of idea representing one particular features of astronomical objects.

From early civilization, human have looked up to the sky and create cultures around it. Moon, as the brightest object in the earth night often invites people around the world to make sense of it’s existence. Before science and reason become major force on human civilization, their habit of interpreting, making sense, and clarify something which beyond their reach, never really vanish. Delusions, I thought is a balancing force that become inevitable. This work is based on my observation on how human creativity is being triggered. The process of creation always through the same pattern which i s always being repeated o ver time. We have ability to record in our memory, to capture, to remember what their objective looks relatively to other humans. I called this “recording”. Then we developed anything in our memory to another form, entering “deforming” phase. And the most interesting of all, we could combine all of that process with another memory from another experience to create something new out of it, “combining”. To demonstrate these possibilities, the moon is the perfect object. It universally represents something which humans always amuse and have diverse interpretation among cultures around the world. I would like to show that possibilities of recording, deforming and combining as a process which fundamentally important in our creative process.

Kathrin Honesta
Kathrin Honesta is a full-time illustrator based in Jakarta, Indonesia. After graduated from The One Academy Kuala Lumpur, she worked at Leo Burnett KL for 1,5 years before decided to focus on doing illustration full-time as a freelancer. Her illustrations are mostly stories about faith and people. She believes that an artwork is not about just being pretty aesthetically, but it’s about the message it is saying. She has worked with Samsung, Prudential, Scholastic Asia & HarperCollins doing works like campaign illustrations, story books & book covers.

These are a series of Kathrin’s collective works for the past 2 years. These collective series consist of her commissioned, personal, collaborative, as well as initiative works. She emphasizes a lot on story telling in most of her work. For her, illustration is a kind of self-expression; most of her personal works are based on her thoughts and what she felt at the moment. People often used words like whimsical & dreamy to describe the world that she incorporates into most of her works.

Diela Maharani
Diela maharanie is a self taught illustrator based in Jakarta. She likes creating a world where everything is bright and colorful but then the irony came up when a figure shows up in her work, despite of the colorful scenery / attributes, the characters remain melancholy in some ways, with illustrations she tries to develop her aesthetic sense and develop a systems to express her thoughts or ideas or simply her response to what is going on around her and not forgetting the joy of drawing which has made her lead the path to become an illustrator. Her works has been shown in several exhibitions in Jakarta and other cities like Paris, London, Hongkong and recently in Osaka.

Title: A collective works of threads

Natasha Gabriella Tontey
Natasha Gabriella Tontey (b.1989) an artist and graphic designer, interested in exploring the theme of fear, horror and terror. She questions the idea of how fear could be manifested and created in order to control public opinion and concern also the concept of fiction and reality and some offbeat thought. She tries to bring this idea by developing a mixture between fiction, dream, and memory with an interdisciplinary approach. She has obtained her BA from Visual Communication Design In Universitas Pelita Harapan on 2011. Some recent programmes that she involved in are Youth of Today at Ruang MES56 (Yogyakarta, Indonesia) LIMINAL at Cemeti Art House (Yogyakarta, Indonesia), Koganecho Bazaar 2015 (Yokohama, Japan), Next Wave Festival 2016 (Melbourne, AU), and UNKNOWN ASIA 2016 (Osaka, Japan).

In a period of approximately 7 months (February 2016 to August 2016) I decided to make a dream journal, everyday my ability to remember dreams becomes better and better. It becomes a brouhaha activity after waking up. I treat the collected dreams as ready made object, which is fiction, as the base of this project. Dream is something very personal, it happens in my mind, dreams always come in unpleasant ways because its position of being unreal but somehow haunting and its strange position of being a predictions and past. Dreams are communicating with reality and has two different spaces, personal and social space. It is like a residue of both imagination and reality. Referencing to Susan Sontag’s argument about fiction was made for understanding the absurdity. Here I would like to experiments on fictional processes as an act for both art and exhibition making, more and more image more and more interpretation and lost meaning, the excitement of exploration, construction a version of myself, so on.

Ruth Marbun
Ruth Marbun is a Jakarta based artist that took a turn into the visual art world after previously studying and working for years in the fashion industry. Through her accidental affair with illustration, she found a new challenge in painting that extends her idea and thoughts within a shorter distance between the creator and creation. Taking off with watercolor medium, she is now exploring mixed media with an expressive take as part of the transitional bridge from design to fine art. Currently she is participating in exhibitions and projects to develop and explore ways of communicating her interests, especially in the idea of process itself.

Title: Well, Understanding Chaos Is The Introduction To Beauty.

The void between positive and negative is filled with energy that pushes towards each other. We admit flaws in loving. We sleep less in the name of passion. We accept ugly truth to take pride honorably. The emotional landscape created amidst both ends has become our nature as human and therefore the state of opposites appear as a paradox.

The fate of a designer is not determined by the public system, but by the way he sees his own life